The Death of a Dog, the Birth of a Legend

The shot that rang out on the night of October 18, 1869 affected dog lovers everywhere. On that night that Old Drum was shot, and when Charles Burden found his favorite dog dead he vowed someone would pay for the murder of his beloved and valuable hound. That “someone” was his neighbor and brother-in-law, Leonidas Hornsby. A number of his sheep had recently been killed by dogs, and he vowed death to the first dog found on his property. Old Drum was that dog. Burden could not let the death of Old Drum go unpunished, and the case went to court.

The case of Burden vs. Hornsby was tried three times before the final case in Warrensburg, Missouri on September 23, 1870. Hornsby took the case to the Court of Common Pleas in Warrensburg, claiming the case against him was circumstantial. (Ironically, Hornsby did not actually pull the trigger; his ward Samuel “Dick” Ferguson did.)

It was at this trial that Burden brought in the legal expertise of George Graham Vest, and here where Vest made his famous speech - essentially a eulogy of Old Drum - appealing to the jury and to dog lovers all over the world. The speech won the case for Burden, who was awarded $50 in damages for the loss of Old Drum. Hornsby took the case to the Missouri Supreme Court where the verdict was upheld. 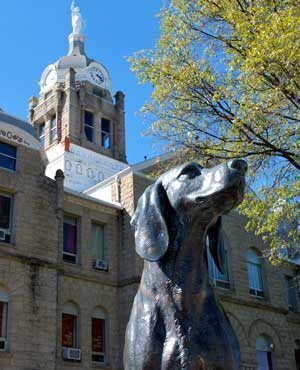 The “Eulogy” to Old Drum

“Gentlemen of the Jury, the best friend a man has in the world may turn against him and become his enemy. His son or daughter that he has reared with loving care may prove ungrateful. Those who are nearest and dearest to us, those whom we trust with our happiness and our good name, may become traitors to their faith. The money that a man has, he may lose. It flies away from him, perhaps when he needs it the most. A man’s reputation may be sacrificed in a moment of ill-considered action. The people who are prone to fall on their knees to do us honor when success is with us may be the first to throw the stone of malice when failure settles its cloud upon our heads. The one absolutely unselfish friend that man can have in this selfish world, the one that never deserts him and the one that never proves ungrateful or treacherous is his dog.

Gentleman of the Jury, a man’s dog stands by him in prosperity and in poverty, in health and in sickness. He will sleep on the cold ground, where the wintry winds blow and the snow drives fiercely, if only he may be near his master’s side. He will kiss the hand that has no food to offer, he will lick the wounds and the sores that come in encounters with the roughness of the world. He guards the sleep of his pauper master as if he were a prince. When all other friends desert he remains.

When riches take wings and reputation fall to pieces, he is as constant in his love as the sun in its journey through the heavens. If fortune drives the master forth an outcast in the world, friendless and homeless, the faithful dog asks no higher privilege than that of accompanying him to guard against danger, to fight against his enemies, and when the last scene of all comes, and death takes the master in its embrace and his body is laid away in the cold ground, no matter if all other friends pursue their way, there by his graveside will the noble dog be found, his head between his paws, his eyes sad but open in alert watchfulness, faithful and true even to death.”

Characters in the Case

George Graham Vest, probably the most famous face from the trial, was born in Frankfort, Kentucky, on December 6, 1830. Following graduation from law school, he moved to Pettis County, Missouri, and began practicing law in Georgetown. He moved to Boonville, Missouri, and in 1860 he was elected to the Missouri House of Representatives, where he was Chairman of the Committee on Federal Relations. He was also the author of the Vest Resolutions, denouncing coercion of the South.

When the Civil War broke out Vest returned to the South to give his services to the Confederacy. After the war he returned to Sedalia in Pettis County, Missouri, and resumed his law practice. It was at this time in 1869 that Vest was asked to represent Burden and Old Drum in the case that would make him famous. In 1877 he moved to Kansas City, Missouri where he was elected two years later to the United States Senate. He was a member of the Senate until March 3, 1903.

In 1854 Vest married Sallie Sneed of Danville, Kentucky. They had three children, two sons and a daughter. On August 9, 1904, Vest died at his summer home in Sweet Springs, Missouri, and is buried in St. Louis, Missouri.

Charles Burden, owner of Old Drum, was born on February 28, 1825, in Kentucky. He came to Missouri before the Civil War to farm. Burden was known for owning choice land along Big Creek in Johnson County, Missouri, and a pack of good hunting dogs. He had three children Sallie, Jennie, and Charles. Charles Burden died in February of 1911 on the farm near the death of Old Drum.

Leonidas Hornsby was Burden’s brother-in-law and neighbor. There was no ill-will known of between the men either before or after the case of Old Drum; the years healed any wounds after the trial.

According to relatives, though both men were not poverty stricken, it took several years to fully recover from the financial losses of the trial.

Burden and Hornsby are buried a few yards apart in Hornsby Cemetery outside of Kingsville, Missouri.